1) Douglas Engelbart was rejected by Sranford for a teaching position because his research seemed too removed from practical applications. He then joined University of California, Berkeley. Source

2) In 1945, he came across “As We May Think”, an article by Vannevar Bush (the head of the U.S. Office of Scientific Research) – It was this article that made him resolve to change the world as a computer scientist. Source

3) Many variations of what we know as mouse today were tried – including a device that would be affixed to the underside of a table and controlled by the knee. As we know, the desktop mouse won. Source

4) On December 9, 1968, Douglas C. Engelbart and the group of 17 researchers working with him in the Augmentation Research Center at Stanford Research Institute in Menlo Park, CA, presented a 90-minute live public demonstration of the online system, NLS, they had been working on since 1962. That was the first public apperance of the mouse – and this is now known as “The Mother of All Demos” | Video 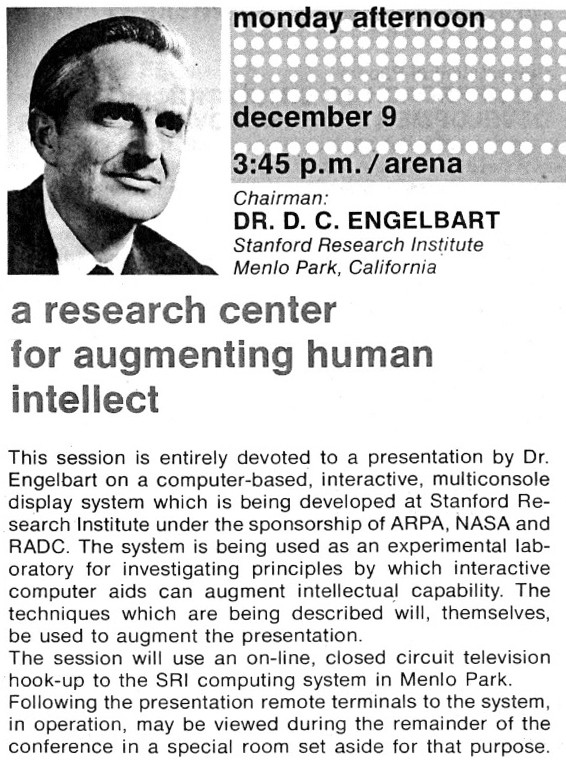 5) He never received any royalties for the mouse, which SRI patented and later licensed to Apple. Source

6) Doug Engelbart coined the term bootstrapping to describe how whoever is working on developing and/or deploying new/improved tools and practices for boosting Collective IQ could use what they build to boost their own effectiveness – it’s the expectation that anyone working on an important aspect of boosting Collective IQ will seriously push the envelope through their own experimentatal usage of their work product(s); it’s providers using what they provide to become faster, smarter, more effective providers. In 1989, Engelbart joined forces with his daughter Christina Engelbart to found the Bootstrap Institute in a quest to form strategic alliances aimed at dramatically improving organizations and society at large. Source

7) He and team called the cursor on the screen originally – “the bug” – the name never took off. Source

8) At a dinner in 2010 celebrating Engelbart’s 85th birthday, Apple co-founder Steve Wozniak leaned over to Engelbart and said: “If all the leaders of the world — the presidents of all the countries, the CEOs of all the companies — were in this room, you’d be my hero. You’d be the one I’d gravitate to.” Source

10) It was William English, a mechanical engineer at SRI, who, with the aid of a draftsman, fashioned a pine case to hold the mechanical contents using Douglas’ sketch – the first mouse. Source